He is the father of stage star, Billie Burke, who was married to the producer, Florenz Ziegfeld.

Billy Burke …was a Circus Clown whose Daughter was the famous actress …Billie Burke, who played “Glinda the Good Witch”… in the Wizard of Oz…….A rare piece of Circus Ephemera.

He was the English Clown, Billy Burke; a big name in the legendary Barnum & Bailey Circus.

William “Billy” Burke.  toured the United States and Europe, who was a singer and clown and worked for the….

The Barnum & Bailey Greatest Show on Earth Songster.  It is about … Billy Burke — 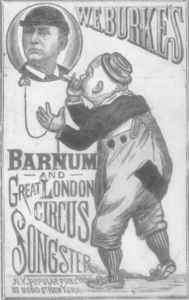 Another well-known singing clown of the Civil War period was William Elhelbert Burke. Burke was born in Ohio, on October 23, 1845. His fun-making began, of all places, while working as an apprentice to a druggist in Frederickstown, Ohio. Billy became the center of a mirth loving group that headquartered at the drug store.

Though only sixteen years of age he joined the Union Army. At the battle of Arkansas Post, Burke was seriously wounded, and so disabled received an honorable discharge from the Army.

In 1865 his first professional mirth-making began when he joined a minstrel troupe. This association was short lived and he left soon for employment with the J. M. Nixon Circus. He was to join the show in Galveston, Texas, and fate nearly cut short his life when the steamship carrying him to the Nixon show was wrecked at sea, and after being lost he was picked up and brought to New Orleans. In this city he was quickly secured by the Thayer and Noyes’ circus. While with this company he again had a bout with the water elements when the steamer carrying the troupe was wrecked on the Red River. In this case Mr. Burke escaped with only the loss of his handsome and expensive wardrobe. He remained with Thayer and Noyes for two seasons and then signed with the Mike Lipman show. He then moved to the great Forepaugh show for two seasons. From that show he went to the Lewis B. Lent Circus that was appearing in New York City. He met with brilliant success there. His next engagement was with the James Robinson show, and it was while he was with the show that it merged into the “Great Chicago Show.” Following this he was with the Trans-Atlantic show and then returned to Lent, and then moved to the Great Eastern and on to Montgomery Queen. He was with various other shows before becoming a feature with the… Barnum and Great London Circus in 1882.

This poster is one of many fine examples of circus posters printed by the Strobridge Lithograph Company of Cincinnati in the early 1880s… when American entrepreneur and cultural icon …P.T. Barnum first negotiated the merger of his circus to form …”P.T. Barnum’s and Great London Combined.” 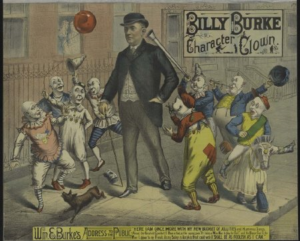